Matt and Rhyan started Pele's in 2010 with a love for pizza and the passion for wood fired cooking.

Before moving to Northeast Florida, Matt and Rhyan were living on the Big Island of Hawaii.   Matt was a pizza cook at Kuki'o Golf and Beach Club near Kona honing his skill of making hand crafted pizza.    He was fortunate to be tutored under Executive chef Michael Bilger at Kuki'o who was renowned previously from Napa restaurant's, Vivande Porta Via and the Carneros Inn in Northern California.   Only the very best was acceptable at Kuki'o, and Matt was always making pizza for the uber elite of society.  Matt has crafted pizza for the likes of Michael Dell, Ellis Short Jr., Marc Benioff, Lance Armstrong, Eddie Veddar, Don Cheadle, Leonardo DiCaprio and many others.

Living on the Big Island offered a wonderful healthy lifestyle, that we enthusiastically took advantage of. Matt was a seasoned Ironman triathlete who finished two world championships in Kailua-Kona.   An enormous amount of sweat, blood, and tears were spent during training and preparation for the grueling 140.6 mile event.   After safe passage over thousands of miles through the lava swept Big Island, Matt felt he owed the beloved Island goddess a tribute for keeping him safe.   Matt and Rhyan made the decision to honor her and dedicate the naming of the future business to Madame Pele,   The Hawaiian fire goddess.     Matt and Rhyan moved to Saint Augustine in 2009 to settle closer to their family and start a family and business of their own.

We began our first pizza service at the small Vilano Beach market and participated every Saturday at the Riverside Arts Market throughout 2010.  When Intuition Ale works first opened, we had the great opportunity to serve our pizza at their taproom three days a week. Luckily, those were the days before serving food was prohibited at the brewery.  At that time, food trucks were not welcome in Jacksonville and Pele's mobile was serving "rogue"  on the streets during the late night scene outside Dos Gatos. Pele's Fire is proud to say it's one of the first mobile street vendors in Jacksonville and who also brought awareness to the area of the growing national food truck movement.

After partnering with Mark Frisch, BSF Inc. and Armada FC,  PELE'S WOOD FIRE, the brick and mortar restaurant in Riverside, was constructed and opened.  Three years of wonderful flavors, people, and experiences filled our lives during our hard work there.  Ultimately bitter sweet for us, and sadly for our fans; the doors of Park and King were transitioned to a new restaurant group and concept.

Today we are happy to continue our passion of wood fired pizza and catering with our mobile Pele's Wood Fire business.  We love to cater weddings and parties, stay current with the food truck scene, and also   "slang zaa"  at large concerts and events.  If you'd like to have our mobile wood fire oven at your party, market, or event. Please contact us!! 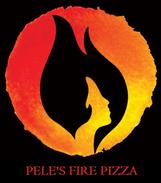